Apologies for the prolonged absence…I fully intend to make up for it, despite a lack of certain punctuation marks on this borrowed laptop (it beats the olde worlde internette shoppes though), with a thrilling article detailing my intrepid adventures around the Azuero Peninsula, on the Pacific Coast of Panama.

Yes, I am back to my usual chirpy self. Having indulged in several forms of therapy (yoga, hammocks, tea), some intensively, I have managed to shake off the misanthropic pessimism and start being grateful instead.

There follows a brief description of the first part of my adventures. There aren’t many photos as I chose not to bring my iPad along so I could spend more time contemplating my aloneness. Being so conspicuously sans internet device on the backpackers’ circuit makes you look like a bit of a weirdo at times. Especially when you are lying in a hammock confronting your aloneness with a despairing grimace on your face. But it has done me good, apart from the fact that I’ve started smoking again after giving up for a month. Sitting at a table with six chirpy backpackers with no social camouflage whatsoever was just too much for me. That first drag was a big smoky sigh of relief.

There follows the tale of my trip, which has, as the title divulges, mostly revolved around hammocks, It comes directly, in unedited form, from my diary. Enjoy.

It is a testimony to how insular I have become that interacting with people today was an enjoyable novelty. I caught a ferry to Almirante, a bus to Chiriqui (action movies, ginger cakes, roadside banana arguments), then another bus to Santiago (huge man’s knees digging into my back), and then a taxi to Veraguas Hostel, which was closed. At the supermarket, I laughed with a woman who picked up a bag of oats and they spilled everywhere. A wonderfully cordial gentleman sat down to dinner with me in the eatery opposite Veraguas Hostel (where dinner, incidentally, cost me two dollars) and left me his card should I need help during my travels. I was tense for most of the day, probably because I haven’t left the boat for a year. Stayed the night in the motel “Caminos del Sol” opposite the bus terminal which was less “pathways of the sun” and more “abandoned office block meets downtown brothel”, but still, it was cheap.

I keep getting urges to break through to the darkest parts of myself and do something…find something NEW. Some other way of thinking or being or doing…some action or thought which surprises me and everyone else. Maybe it would be connected to an existential experience like being in the bottom of a well for three days in darkness. I am reading Haruki Murakami’s “The Wind-Up Bird Chronicle”. It’s like living in two worlds.

I arrived at Eco Venao after three small minibuses and a stop in Pedasi for some reasonably priced bolognese. The buses are easy to use and absurdly cheap. There are so many babies everywhere! Also, old Panamanian men looking smart in hats and shirts. People dress smartly to travel. I like that. I watched the surroundings become more and more rural until even lonely bungalow verandas and toothless old ladies disappeared, giving way to lush rolling hills and cows with weird fins on their backs. The Pacific Ocean seems darker but maybe that’s psychological. Venao is straight out of Lord of the Rings with its mystic green beauty. Everything is green; the water, the rocks, the jungle overspilling onto the beach over rusty cliffs, even the sea worms. The sand is cool mud; at low tide the beach seems infinite. Eco Venao is a relaxed, easy place to be. With its own family of monkeys and several hammocks placed in top-class locations around the site, which is buried in the living, breathing forest.

Murakami writes that people don’t change; they think they’ve changed, but then the person they once were pops up and says hello when you thought they were gone for good. I think this is true to some extent, but if you know you want to be a better person, and you are willing to engage in the discipline and perserverance needed, then you can change yourself, just like changing a set of habits really. Isn’t that all we are, just a set of habits?

Sleeping in shared dorms is something which requires a little getting used to. I can’t get off to sleep as I’m worried I might fart in my sleep or start wailing like a banshee like I’m occasionally prone to doing.

Apparently it’s Thursday, not Friday. A lovely surfer called Daniela just arrived from Austria. She says “wedgetables” in a cute way. I had a lonely moment in the literary cafe as I ate my cheap noodles. But it passed. I am doing yoga every day, which is tiring, but very rewarding and mind-clearing.

BIRTHDAY PRESENT TO SELF

In what may either be a worrying return to the solace of childhood or an exercise in contemplation, I spotted an array of colourful threads in the supermarket and decided to make some friendship bands. I have since spent most of my days lounging in hammocks weaving. My friend New York Suzanne acts as my agent and switches on the charm, telling people about her friend Emma over there in the hammock, who makes friendship bands, and will you buy one, because she is poor. It is a relaxing and satisfying pastime. So far I have made three dollars. 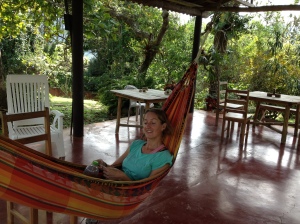 I am writing the next installment as we speak and look forward to whichever punctuation challenges it presents. It’s about time I got back to my hammock. Now I’m wondering…does this still qualify as a sea tale, even though it comes from the land?

One thought on “Hammocks of the Azuero, Part 1”