Departing las Palmas into fairly strong winds and large swell, the intention was to “holiday” in El Hierro for a few days after a hectic month of preparation, before pressing on across the Atlantic. But after 36 hours of increasingly large swell and winds approaching force 9 (nervous fart) we found ourselves one nautical mile outside the marina entrance, unable to enter even with our motor against such strong winds. At moments during the approach where I was able to lift myself up on one elbow and peer out into the cockpit, I caught glimpses of the patient skipper, hanging on to the tiller despite sideways wind and rain, a grimace of maniacal determination on his face while the boat pitched, rolled, and surfed down monstrous black waves of death. To try and enter the harbour under these conditions would be extremely dangerous; he made the decision to turn the boat back into the wind and continue on to Cape Verde, a decision which marks one of the lowest points so far in my sailing experience. Skipper tells me that he will always remember that feeling of desperate resignation as he turned away from the blinking lights of the harbour, closed the hatch and faced the true horror of having to break the news to me. It was a strange moment. At that point, I wasn’t even sure how many cuppa soups we had left. 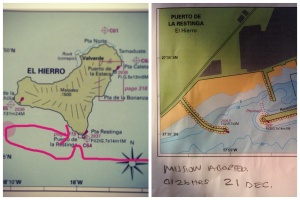 After a few hours of rest with the boat on autopilot heading west, we awoke surrounded by comparatively idyllic waters, with the dark mottled cliffs of El Hierro beyond our bow. During the night, the island’s wind had carried us westwards for a while, before gently turning the boat back towards the island as we slept. The magical mystical volcanic power of the island as it drew us back in magnified the thrill which always accompanies landfall tenfold. We felt the island loved us; it wanted us. Come to me, it sang. Drink beer on me. You know you want to. After a blustery approach we slid exhausted into a berth, destroyed a full English breakfast and recounted the journey to each other in disbelief. Skipper tells me waves were breaking over the boat and at one point the cockpit was filled knee-high with water. Pretty bloody intense. Shame I missed it.

Sitting in the marina this evening, watching those blinking lights from the other side, that night still seems quite unreal. The difficulty of the crossing has doubtless contributed to a fondness for the island which grows day by day for many different reasons. When ancient, sonorous space is all around you, in the black lava swirls frozen in time on their path down the mountain, the vast ever-present Atlantic, the way  sea turtles move slowly through the crystalline waters and the eagles circle the crumbling volcanic peaks, you feel yourself responding, creating space inside yourself to let it in. El Hierro sings its own song, perched at the edge of the ocean over which troubador winds whistle relentlessly, meeting the song of the island with tales of their own.

Which is just as well, because sailing is well scary, and we are staying here for ever.

I’ll sum up with the answer to my brother’s recent question: “When are you going to stop fannying around on islands and do some real sailing?” I don’t know. The rigging is being repaired, which could take a few weeks. And carnival here is supposed to be a right knees up. Watch this very slow-moving space…

5 thoughts on “Search for El Hierro Inside Yourself, Part 1”